Halloween is not very far away and there are already a few trends popping up all over the internet. One of the trends was the galaxy Jack-o-lanterns which took the internet by storm. Maybe in a few days, a costume trend will also come up. Hollywood has thousands of horror movie characters to inspire a Halloween costume. There is also the recent Annabelle which is a favorite. Plus, many people still go for Wes Craven’s Scream mask even now.

Read: A Lazy Bloodhound Accidentally Participates In A Marathon And Finishes Seventh

However, there is one hidden gem which still hasn’t lost all its allure: Chucky, the killer doll. Even now, if you watch the movie, you might be transported back in time and find yourself crouching as Chucky moves towards the camera. As a child, Chucky must have been a nightmare for you. It is still a favorite costume among many children for Halloween.

But why should only humans have all the fun? Aren’t dogs allowed to have their Halloween too? 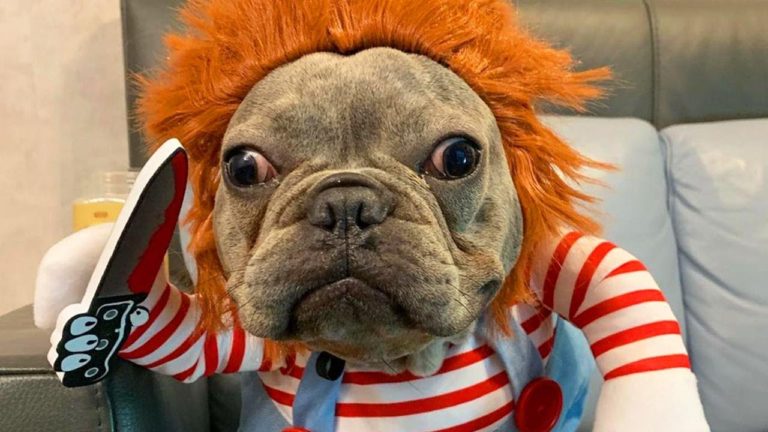 Vanessa Cheng from Hong Kong wanted to celebrate Halloween a bit early on. But she did not want to celebrate it on her own. That’s why, she brought her dog, Romeo, along. The French bulldog looks absolutely adorable but according to Vanessa, he resembles Chucky.

Vanessa is a horror-movie buff and she loves the killer doll. And so, what better way to celebrate Halloween than giving her dog a complete makeover? So, she got to work. She put on a wig on Romeo, made him a foam knife, and also got Chucky-like clothes. And finally, what does Romeo look like?

Oh the horror – the horror! He does look like the doll from the movie – only, he has transformed into a cute little dog. He is almost like a nightmare! Vanessa recorded a video of Romeo running like Chucky and it looks really adorable. And scary!

Read: Dog Makes Woman Sit In Back Of Car Then Holds Hands With Her Husband in Hilarious Video

Well, Romeo really looks cute but many people have mentioned how this fancy-dressing of dogs is similar to mild animal abuse.

Well, if toxic products have not been used for it and the clothes fitted well, then, maybe it’s all right.

Every dog needs their Halloween too. Maybe Romeo could be an inspiration for them!