The epic 1994 movie, Lion King, can be referred to as one of the best Disney movies ever made. Everything about the movie seems so perfect. It takes inspiration from the famous Shakespearean play, Hamlet. Only this time, people were replaced by animals. The movie has everything in it, humor, romance, action, and tragedy. Especially, the tear-jerking moment when Mufasa dies just in front of his son, Simba.

If you felt awkward tearing up at this scene and hurriedly, reached out for the tissue box, then don’t be. Even Luna, a puppy felt the same way. Josh Myers was enjoying the Lion King with his girlfriend, Hannah. Luna, the little pup, was just playing around with some toys. 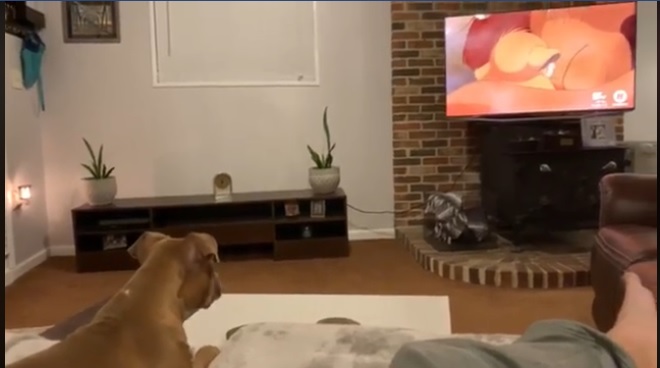 But then that terrible scene flickered on the television. Mufasa is holding on to the ledge and trying to lift himself up, asking help from Scar. But then, Scar claws at him and he falls into the stampede. Once the stampede is over, Simba slowly emerges and finds his dad, lying there, dying. It is probably one of the most emotional scenes in Disney history.

As the scene kept rolling, Josh and Hannah saw another remarkable scene unfolding. Luna, the emotional pup, had stopped playing with her toys. She just stood there, enthralled by the scene. Suddenly, she started crying when Simba discovered that his father had died. Luna, the emotional pup, even lies down just like Simba lies under his father’s arms.

Read: This Sick And Dying Puppy Was Rescued And Brought To A Chimp Sanctuary For A Wonderful Recovery

“Anything you feel, I can feel too.” 🐾So Hannah and I were watching the Lion King while Luna played wildly with her toys. But right as Mufasa falls to his death, she stops and turns to the TV to watch. To see her crying at the TV was the sweetest thing I think I’ve ever seen. She even lays down right after Simba lays with his dad….We don’t deserve dogs. 💚 4 months old and she’s already showing empathy. I can’t wait to see how she reacts to the new live action Lion King!*VOLUME 🆙*Follow Luna on Instagram! @luna_o_thepitbullFor licensing or usage, contact: [email protected] ViralHog

Josh says that it was such a sweet thing to see. He immediately recorded it and posted it on Facebook. It becomes clear that great art can be appreciated by all – it is not a ‘human’ thing. But more importantly, Josh thinks we don’t deserve living with dogs. They are just too lovely and empathetic.

Well, Luna, the emotional pup, just showed that dogs have feelings too – and sometimes, it transcends ‘animalistic’ feelings and becomes all too human.