There are many animal shelters with kind and loving humans. They ensure that the animals that they rescue or keep get the best treatment. These animal shelters keep themselves well-equipped to the needs of the needy dogs and help them  be mentally stable if they have faced some trauma in the past.

However, not all dogs are lucky. There are many shelters with a shady background. Many of us do not know the operations that go behind these shelters. And worse still is the terrible pain that the dogs go through in these shelters.

Read: This Sick And Dying Puppy Was Rescued And Brought To A Chimp Sanctuary For A Wonderful Recovery

Edie was such an unfortunate dog. For some reason, she was deemed as unfit to live. She was supposedly, ‘too aggressive’. Once that label was fixed to her, Edie was considered as a dog who had to be put down. Somehow, she understood the motivation of the shelter officials. Edie would often keep to herself at a corner, trying to stay away from the menacing hands of the shelter officials. 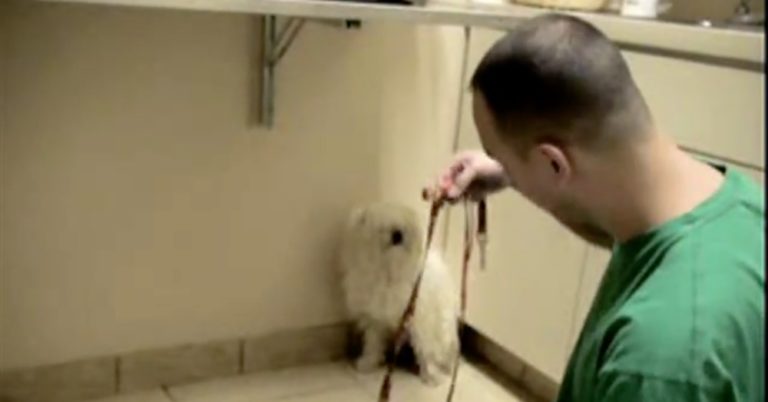 However, for the unfortunate dog, fortune was keeping Eldad Hagar as the angel. Eldad Hagar looked at the dog and was almost sure that he could help her. Edie was scared of Eldad too. The unfortunate dog went into a corner and waited – she did not want Eldad to come any bit near.

But Eldad knew that the unfortunate dog was scared. He took out a leash and steadily slipped it around Edie’s throat. Edie was too scared. She yelped and made a scene. When Eldad’s hand touched her, she defecated too. Then, Eldad gave her a nice pat. A few strokes on her head and Edie became the friend of Eldad.

Now, Edie and Eldad are the best of friends. Nothing could keep them apart. Eldad is actually a worker at Hope For Paws shelter. After all the grooming processes, maybe Eldad would keep Edie or put her up for adoption.

Later on, a Bronwyne Mirkovich adopted Edie and gave her a wonderful life. After a road trip from Home For Paws shelter to San Marino, CA, she got to her furrever home.

And now, her life of trauma is in the past.