“animal cruelty” Monsters come in all shapes and sizes. And more often than not, they have invested in a human face to serve as a mask. Meet Paul Garcia from Jefferson County. He tied a dog with tape and threw him out of his car in the winter cold.

A society is counted upon to stand by its weakest. The pets we adopt know that they can always count on their owners to be there till their last days – that they will never be abandoned. Their greatest fear is that they will lose the person they love unconditionally. Their master might scold them, beat them, but they will never for a moment consider walking out.

Paul Garcia was arrested for his heinous act of animal cruelty. The charges were armed criminal action and felony animal abuse with bail set at $50,000. A statement by Jefferson County Sherriff’s Office said they had him in custody thanks to the deputy, technicians specializing in crime scenes, detectives, and fingerprint experts. 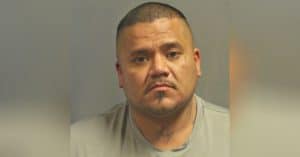 The dog, Jimmy was taken to a hospital in terrible condition. He was very cold, had not eaten for a few days, and possibly had suffered a concussion. His mouth and his paws had been taped.

The dog proved much tougher. He has recovered and was shown wandering around wagging his tail. His big soulful eyes convey the pain of being subjected to an unpardonable act of cruelty.

Read: Seeing how the mother dog protects the puppies from being punished, we can learn that animal’s motherhood is also sacred

The appeal on media was heeded and the owner turned up. The dog was owned by Katie Kofron and Flick. The dachshund, aged 13, went missing from the backyard. The police narrowed in on Garcia and found evidence that tied him to the crime scene. His fingerprints were found on the tape that was used to tie the dog. He is sure to get the maximum possible sentence that he truly deserves. 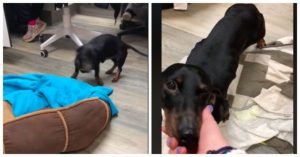 While this was an extreme case of overt and intentional acts of violence towards animals, it can take many forms including neglect or the failure to provide for the welfare of animals under one’s control. Causing psychological harm to animals in the form of torment, terror or extreme distress also constitutes animal cruelty. Considering the various forms that cruelty towards animals may take, it is broadly described as an act or omission that leads to unnecessary or unreasonable harm to any animal. Some particular instances are torturing or beating, confining or transporting an animal that is inappropriate for its welfare, killing an animal in an inhumane manner, failing to provide the basics, denying medical treatment to an animal and failure to provide appropriate living conditions.

We as animal lovers have it in us to do our bit. Speaking up is the safest way to prevent animal cruelty as well as reporting it to the authorities. This is one problem that will not go away soon.

But as with all crimes, coming together as common citizens will surely defeat the problem.