It has been proven that motherhood exist in the animal world too. You are likely to see animals embrace being a mother just like you would expect a human mom.

Every now and then you will come across online trending videos of mothers going out of their ways to save their children from anything that could harm them. Mothers will go to the extreme of even risking their own lives and putting everything they have worked for at
stake just for their kid’s wellbeing.

This video of a dog saving its puppy has gone viral for its motherly act. From the video, the mother dog looks very restless as a man is trying to get water out the drainage.

The dog’s puppy has been trapped in the drain hole and thus the mother is worried about the turnout of things. The dog keeps making exaggerated moves around its owner to ensure he is doing his best to save the puppy. Mother dog gets restless to a point where he tries to dig the drain hole himself in attempt to free his puppy. 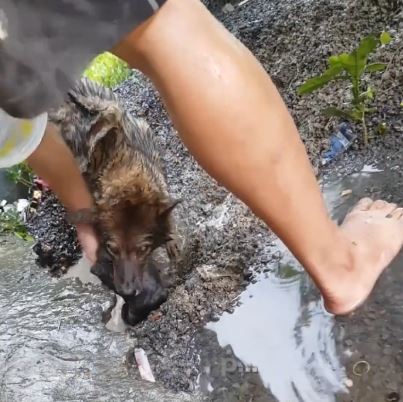 The dog is not satisfied with its owner’s approach regardless of his efforts. At some point the dog stops and gazes at the water drainage which looks like she is trying to figure out the situation.

The dog could not wait any longer. After some time, it looks like the mother dog thinks enough is enough and jumps into the drainage. She stays out of sight for a moment. Just before you wonder what happened to her, she reveals her tail.

In the end, the mother dog saves its puppy from the drain hole. However, the pup was in a critical condition that needed reviving. After the dog’s effort to bring its puppy out of the hole, the owner then takes matter in his own hands. He looks for a dry place where he tries to revive the puppy using his hands.

The video is then diverted to another one showing that the puppy survived courtesy of its mother. Truly motherhood is beyond humanity.