When a fire went ablaze in Taka the dog’s home, his life became critically endangered. When the house the dog lived in caught fire, Taka was trapped in a screened-in porch. His owners could not reach him because of the flames and they had to flee, leaving the burned dog behind.

Taka’s spirit carried him through the whole ordeal. He managed to get out of the burning house and darted down the street. Unfortunately, by the time he left, most of the hair on his belly and face was singed. Burns were there throughout his body when a helpful neighbor found Taka.

READ: Dog Who Survived A House Fire Is Now Dedicating His Life To Comforting Burn Victims

When rushed to an animal hospital, Emily Martin, the burned dog’s vet explained how Taka had burns near his eye, mouth, ears, and tummy. Before treating the physical injuries, the vets at the Care More Animal Hospital in Georgia had to care for his inhalation burns. 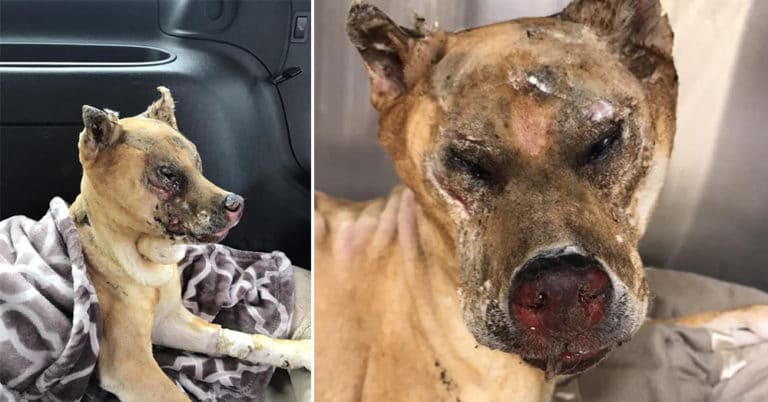 The burns were so severe that the team of vets took him for oxygen treatment in the Uni. Of Georgia. The damage to the pup’s eyesight was beyond repair sadly. Taka still held on.

The dog went through a nightmare and it was evident from his deafening yelps at the hospital. Yet the vets persevered and so did Taka. Martin mentioned how the yelping puppy immediately calmed down when she sat with the pup and sang for him. 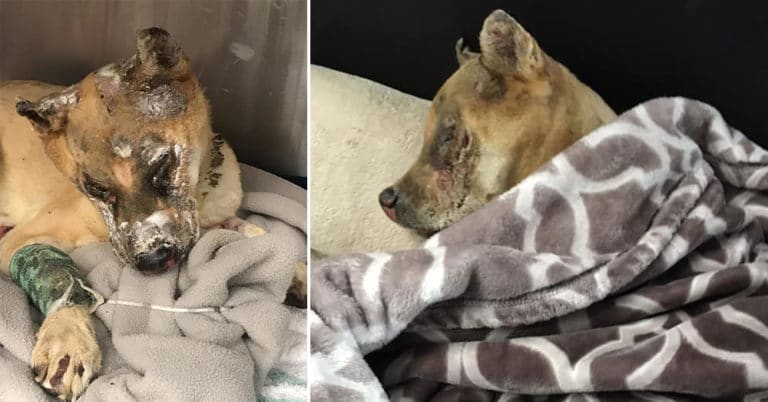 Martin explained to Taka’s owners the gravity of the incident and how he would require intensive care from now on. So they mutually agreed to let Martin take care of Taka. And obviously, Taka’s savior wouldn’t let the pup sleep alone in this condition. So Martin carried him to her home.

Taka was up all night and Martin was there to accompany him throughout the night. The next day, understandably, both were exhausted. While the burned dog decided to doze off in his kennel, Martin joined him there as well! 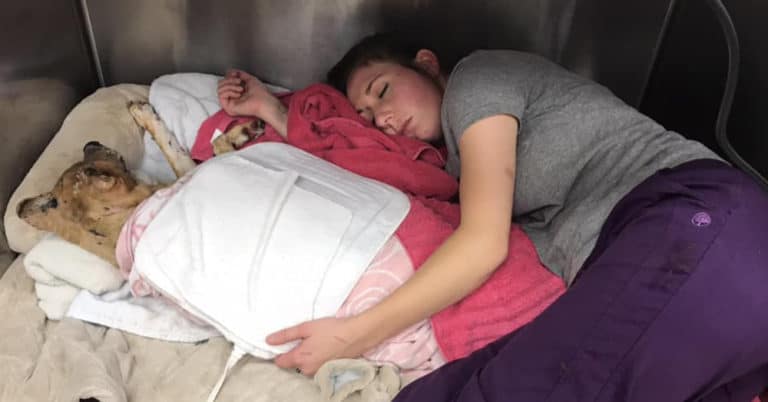 Martin’s commitment to Taka is commendable. And she will be sticking by him till he recovers fully. Martin mentions how despite all the trauma Taka went through, he is still very resilient.

READ: Terrified Dog So Happy To See Rescuers After He Was Abandoned During Hurricane

Martin has a 28-week-old baby as well as 5 dogs at home already. So her chances of adopting the burned dog are slim. She understands this kind and resilient dog and wants to find a good home for him. She further explained how when animals goo through traumatic experiences, they tend to bite or be aggressive. But little Taka did no such thing. 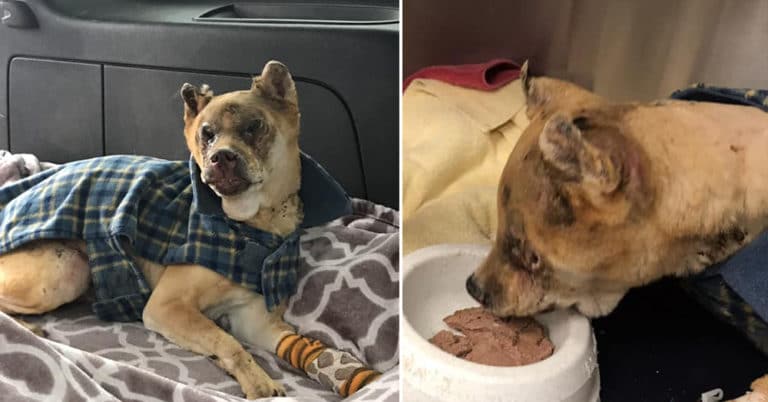 Although the eyesight is gone along with most of his facial hair, Taka is on the path of recovery. Martin and others at the hospital made sure Taka was well-cared for.

Taka has braved his battle and is now a therapy dog helping others in need!

Taka is doing well today. He has a great appetite and is more interactive. It seems like he can see a little bit, as he navigates outside very well, mostly using his smell which is on point!! So we are happy to see that. He is still being kept on high doses of pain meds and sleeps a lot. He is strong and he is a fighter. Falling in love with this guy is the easiest thing we have ever done!! ❤️❤️