It is heartbreaking how someone whom we love more than anything else on earth can abandon us midstream. All that a dog fears most in life is losing the companionship of his master. They are hungry for sustaining adoration. Little else matter to them. “dog in the middle of the road story”.

No animal should be abandoned by the very people who should love and protect them the most. They should stand by their pets until their last breath. In their limited understanding, the poor animals can never comprehend why they are being left alone forever by the person to whom they have given their whole life. Never abandon them; it is a disgrace to mankind. You lose a part of your humanity the day you abandon your dog in the middle of the road. 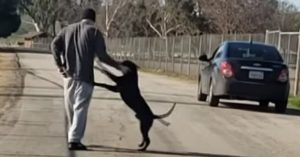 It isn’t everybody who has it in them to own a pet. That requires unflinching love and commitment to stand by them. Your dog too makes the same pledge but then they cannot tell you in so many words. Ever heard of a dog abandoning its master? No sir. But if you care for a pet at your home, there is no way that you can dump them like this dog in the middle of the road. And there is no way that you can justify your action. Some at least come around halfway and leave the pets at some shelter. It doesn’t mend the poor animal’s broken heart but at least there will be food and shelter for the rest of their life, maybe a little less love.

But here we see the rare instance of utter deprivation as shot through the dashboard of the following car. This heartbreaking scene played out in Bakersfield, California. Stephen Sage Silver observed from his car as the couple tried to abandon their pet dog. Initially, they are irritated as the dog takes their attempts to dump him in the middle of the road as a new game that they are playing. 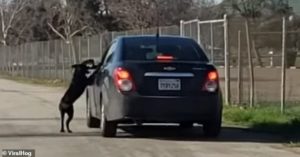 The video shows the man trying to push the dog away and get into his car, still, the dog keeps following him and tries to jump into the car. Silver tries to intervene when he realized that the couple is abandoning their dog in the middle of the road. The man ticks off Silver when he tries to intervene.

The man eventually manages to slip into the car but not before he hurls the dog onto the road. He speeds away even as the abandoned dog gets up, unhurt but broken in spirit. He chases the car for some distance and then gives up realizing the futility of the chase. 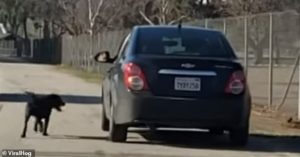 Silver pulls along and does the only thing that comes to mind. He calls for help. Personnel from the Kern County Animal Services arrive soon and take custody of the dog. They will hopefully find a more loving home for the lovely dog quite soon. Till then he will have to make do at the shelter. The dog is better off at the shelter than with the heartless couple who deserve to be punished for this act of wanton cruelty.

Silver has uploaded the video on his Facebook profile to share the dog’s heart-wrenching story and also to bring the cruel couple to justice.