white big dog was rescued from a drainage pipe where it had taken refuge after walking on a frozen lake.

the dog was seen on camera standing alone in the shallow waters of the pipe in Dej, Romania. The poor Dog had been walking alone on the frozen lake which the pipe runs out into, but leapt into the structure when the ice gave way beneath its feet.

Take a look at the dog’s rescue here:

The Dog looked helpless as rescuers peered into the drainage pipe, where the dog stood shivering in the freezing conditions.

The pipe ended with a drop right into the ice cold water, meaning the dog had no way of getting itself out without plunging into the lake.

Thankfully, the stranded dog was found in time, and emergency services arrived at the scene. Firefighters and volunteers set about trying to entice it out of the pipe, but the shivering animal seemed unsure about approaching the strangers. 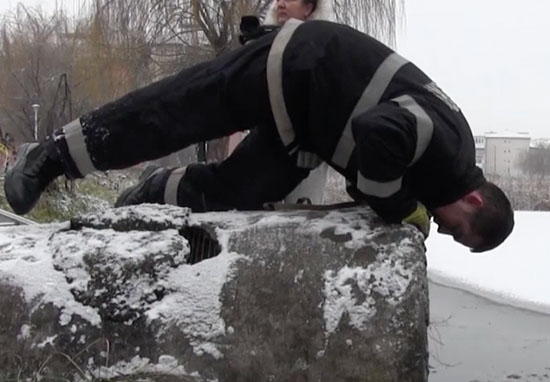 Rescuers placed a rope around the stricken creature’s neck and then hauled it out of the pipe to safety.