The great wide world out there can be very dangerous for anyone and everyone. It is especially terrible for domesticated animals that have been abandoned by their owners. Since they don’t learn the survival skills that animal parents pass on to their young, they become completely dependent on their humans for survival. When abandoned, many of them die of starvation or accidents or are simply sent to the pound. 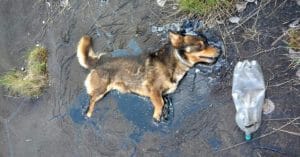 ‘ ism_overlock=’blur’ ] One little dog was however very lucky. Recently, construction workers on-site near a town called Suwalki in Poland heard noises that immediately set off alarm bells for them. Nearby was a small wooded area and they could hear a dog crying out as if he was in danger. They were quick to act on their worries and a search party went out to see what had happened. Finally, they discovered the source of the noise. A small dog was stuck in tar which had been illegally dumped in that area. The sticky puddle had completely trapped him and he couldn’t even struggle to get out. 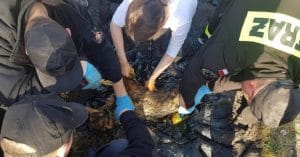 Since the dog was stuck in tar but was still well, the workers reached out to Joanna Godlewska who is a part of the Niczyje Animal Foundation. Not quite sure what to expect, Godlewska reached the scene as quickly as possible. The sight of the helpless little dog firmly stuck in tar brought tears to her eyes. Along with members of the local fire department, a team soon came together to get the poor beast out. Using scissors, they cut off the fur in areas where the tar was incredibly tight. For the rest, they applied cooking oil till he slipped free. 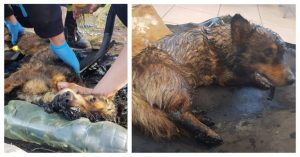 It was evident that the animal had been abandoned. Exhausted from wandering around, he probably lay down in the tar looking for some warmth without realizing that he would be trapped. The relief and gratitude in his eyes were palpable as his rescuers worked hard to get him free. It was obvious that he understood that he was being saved and was very thankful to those around him. He was then taken to a veterinary hospital where doctors worked double-time to remove the tar. Luckily, he only had minor injuries which were soon treated. 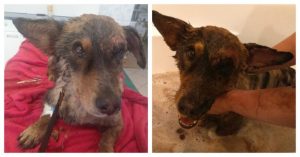 It’s going to take a while to remove all of that tar. The people who rescued him have named him Farcik and he is now being well taken care of. He has to take quite a few more baths to be completely clean. But he is no longer lacking for food and shelter and most importantly, love.

Read: Heart-breaking moment a loyal dog tries to wake up its dead friend hit and killed by a car 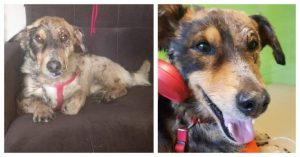 One can only imagine how terrifying it must have been! As the dog was stuck in tar for so long, completely immobile, he must have become really exhausted. Luckily Farcik was determined to live and his strength and courage ensured that his guardian angels found him. Joanna hopes that he will be fully recovered soon and she can find a loving forever home for him.

With his story going viral on the internet, it shouldn’t take him long to find an amazing family.[/indeed-social-locker]