Eclipse, the dog that takes the bus alone every morning. Black Labrador called Eclipse rides a Seattle bus route to a local dog park all by herself, much to the delight of her fellow passengers. She takes the bus to go the zoo where she spends hours exercising and making friends with other dogs, then takes the bus again to go home.

She also has her own bus card, and she hang it around her neck.

The reason for her independence and taking the bus alone, is that its owner ‘Dave Yang’ is always late for the bus and because “Eclipse” was always impatient, she was hurrying to take the bus on her own without him.

Read More: The Dog Of The King Amenhotep II And His Belongings

The bus driver noticed this. He started to take her to the park and her owner would go later. After several trips to the dog, her owner Djev, made sure that she could move “on her own” 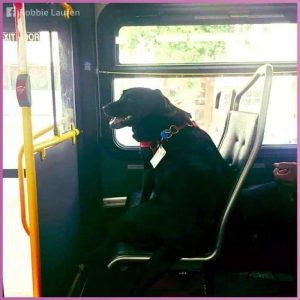 All bus drivers know her because she makes them smile every time she gets on the bus. Also all the passengers enjoy her company. The police even agreed to her the independence of the bus alone as long as the drivers do not mind.

“She makes everyone happy.”