A 5-year-old French mastiff named Mae has had a rough life, but loves everyone she meets. She arrived at Southern Indiana Animal Rescue severely malnourished weighing only 70 pounds.

Mae, a five year old French mastiff had a tough life. She’s very loving and kind but she has a terminal cancer. She was transported to Southern Indiana Animal Rescue with a sever malnourish and weighs only 31 kg.

Furthermore, she was diagnosed with terminal cancer just after her arrival and has only few weeks to live. Elizabeth Strack decided to take her to her home to paper her and give her infinite unconditional love. 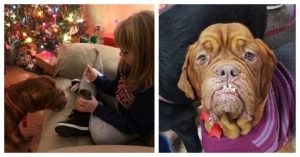 However, her adorable face, and beautiful personality has won her tons of lovers. Mae is a spokes-dog for the rescue and fundraisers campaigns for all her fans.

Though Mea loves people, she loves food more! She tucks ten cans of dog food daily. When Strack announced that there’s a lack of food cans, she was surprised by what people did! They sent more than 700 cans and even more donations and help for Mea! Seems like Mea is truly loved by everyone!

“The support and love you all have shown Mae and all of us is astounding and brings me to tears. In the last couple of days Mae has slowed down a bit more, but she still loves any and all attention she can get. But most of all, she still loves her food,” said Starck.

Nevertheless, she loves to check on the foster cats everyday, she also loves them so much and likes to watch them play. Strack wrote: “Her tail goes insane when she sees them. She woke me up 5 times through the night wanting to check the cats out.” 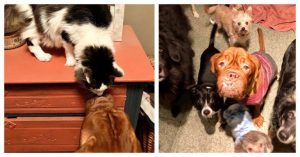 Strack posted: “We made it official in front of Judge Carmichael today. Mae has been adopted, so she can spend her last days with her family

(me being her family 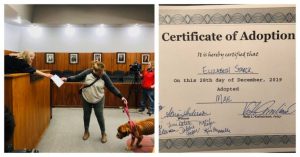 Mea lived some tough days, yet she had good ones. She’s living with the lover of her mom, eating and following her all around.

“Mae’s rescue mission has become more than I ever thought it would be and it’s because of you all.”

See Also: Dog Found Tied With Leash On A Heavy Rock And Tossed In River