Who said animals do not have feelings just like humans do? If you are keen enough with animals, you will notice they are emotional. Animals too feel the pain of losing a beloved one. 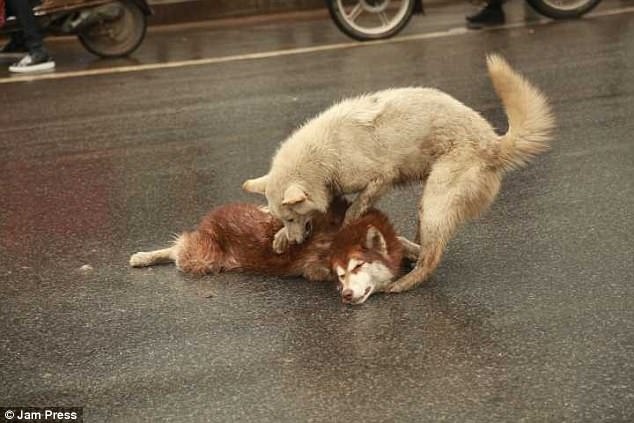 For not less than an hour, a cream-colored husky is seen guarding over its motionless friend who is lying on the ground. It looks like the dog is hurting seeing his friend dead and motionless on the
ground

Pictures of a Chinese loyal dog watching over its dead friend are trending online. This happened in Zhejiang province in China where the husk was run over by a car and left in the middle of the road dead. Despite the road being all busy the dog would not leave its friend alone even though he was dead. The brown husky is seen trying to wake up his friend. He barks in a mourning tone and remains restless till the moment their owner
came to get them. After you see these pictures, you will never hurt a dog as it is clear they have feelings. 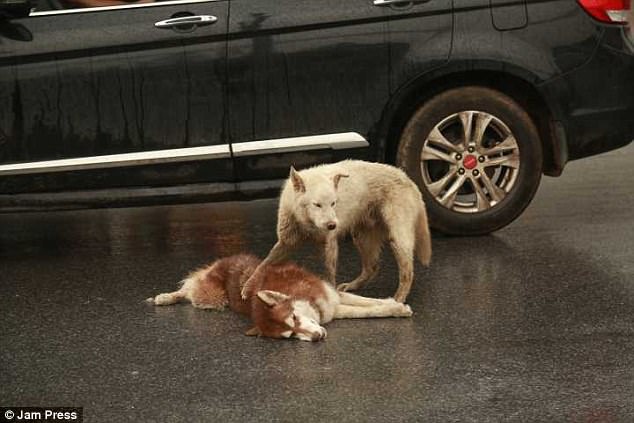 From the look of the pictures, the dog looked as if he was telling his dead friend to come back and be with him. You can easily tell from the picture that the dog was mourning his friend and could not believe he was gone.

Huanqui.com reported that the saddening accident occurred in Nianli town in Quozhou city. About 90 minutes passed with the dog lying still on the road and its friend looking over him restlessly.

After about one and half hours, a woman dressed in black comes and calls the dead dog’s name. But apparently there was no response as the poor dog was dead.The interested woman caught a police officer’s attention. After brief questioning, the police officer confirmed that the woman was the dogs’ owner. She the took the dogs with her.

Animals too have emotions even though they cannot express them the way humans do. When you look at the brown dog’s face and reactions you can easily tell he is not happy about his friend being dead. It would be only right to treat animals with love and respect.