This broken-hearted dog Keeps went to his owner’s grave everyday. We will always remember the photo of the loyal dog Cesur, at his owner Mehmet Ilhan’s funeral. The picture was taken at the Central Mosque in Ohraneli, Turkey. 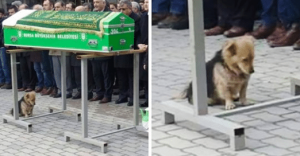 The owner Mehmet passed away while he was in the hostpital. Ali, his son, stated: “My father was paralyzed for many years. So, he adopted Cesur as a puppy two years ago to keep him company.”

Ali stated, “He loved the dog and took very good care of him and I think Cesur is just sad because he is missing him”. He also claimed that Cesur refused to eat when Mehmet was in the hospital. Also, when his body’s returned home, Cesur was there, standing guard.

While in the funeral, Cesur came with us until he reached the cemetery. “He wouldn’t move away from the coffin, not even an inch. At the funeral and then he followed us to the cemetery and waited until he had been buried,” said Ali.

Five days after the funeral, Cesur visited Mehmet’s grave everyday. However, Ali decided to take care of the little loyal dog. Also, helped him through the greif of his owner’s death.