A video of a girl watching helplessly as her dog is shot dead by a dogcatcher has outraged people around the world. It captures the disturbing moment the dog fatally injured by a poison dart tries to run back home before finally collapsing at the gate. The heartbroken girl can only caress the poor dog before it dies at her feet. 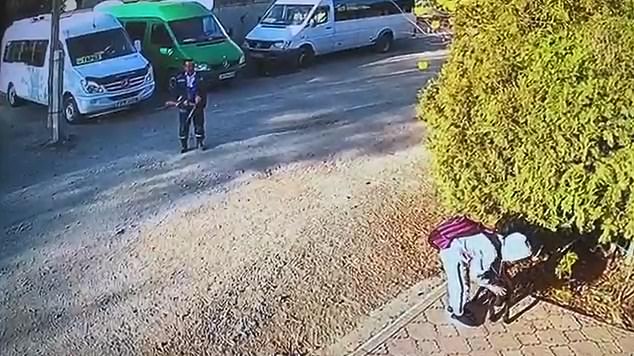 The incident took place in the city of Taraz in Kazakhstan. The black spaniel Barsik, just a year old, died in Shynali Risbibi’s arms. The heartless man stood in the background cleaning his rifle. He waited for the dog to die even as the girl cuddled the black spaniel. As the dog sinks to the pavement, the shooter picks up the corpse of the dog and walks away. The heartbroken girl walks helplessly back into her house. The whole incident was captured on camera, reports Daily Mail.

Shynali’s mother recounted the horrifying events of that day to the local media. She said her daughter was in tears as she rushed home. She was in no position to speak and was shaking. When Shynali’s parents realized what had happened outside they rushed out and confronted the shooter. After a big quarrel, the animal worker showed them the body lying in the van along with several other corpses.

READ: Staff Kicking A Dog At A Day-Care Captured On Camera Sheds Light On What Might Happen In Unsupervised Animal Shelters

Heartbroken girl, eight, strokes her beloved pet dog as she watches it die after it was shot with a poisoned dart by an animal control worker https://t.co/5eZPE70Bp0

Another animal control worker shot dead a pet dog after pointing the gun at a girl just nine years old, who had tried to shield the dog. As the little owner moved away in fear, the man killed the dog. The trigger-happy control workers are paid per kill and that explains their aggression.

Anuarbek Kaltaev, Animal Control head has said that the worker was reprimanded for his actions. Specialists from the unit will investigate the case and the worker, if found guilty, would be fired. But that is little consolation for the heartbroken girl.