A dog owner lost one of his dogs as it was gulped by a large saltwater crocodile. Video footage shows the heartbreaking moment as a monster crocodile swallows his dog as the owner watched in horror from the shore.

Read: This Dog Saves His Cat Friend From Getting into a Cat Fight!

The footage from October 19 shows three dogs playing in the Watson River in Queensland Australia. It must have been high tide and saltwater crocodiles are known to camouflage themselves well. A saltwater crocodile suddenly jumps out of the river and grabs one of them as his horrified owner screams. The other dogs can only bark helplessly as the crocodile disappears into the water. The owner sounds quite upset at how things changed all of a sudden. 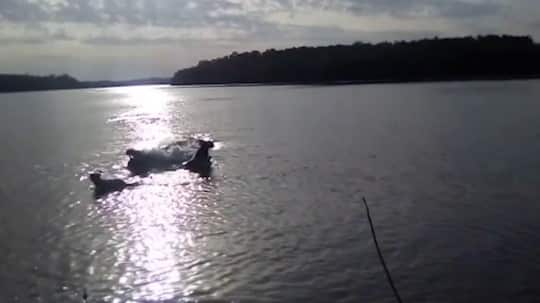 Saltwater crocodiles are the largest reptiles on earth with the male normally reaching up to 5 meters in length and weighing as much as 500 kgs. They can spend weeks drifting in water in seas and along marshy rivers lurking for prey along the banks. They study their prey for long before attacking them. They normally feed on mammals, fish, and even birds though they are quite capable of attacking much larger prey including humans. They normally kill large prey by drowning, though the dog shown in the footage was gulped down as it was quite small for the crocodile.

The footage was shared by Aurukun Indigenous Knowledge Centre on Facebook. Noel Waterman, the coordinator of the center, said that this footage should serve as a caution to pet owners so that they do not allow their pets to play in the rivers during high tide. No owner would like to face something like what this owner went through as a monster crocodile swallows his dog.

Read: Watch How This Missing Senior Dog Was Rescued From A Crumbling Riverbank

It’s a tragedy that could have been avoided with better awareness.