Stories about human depravity surround us, we don’t have to go far to hear a terrible story of siblings killing each other or their parents for their property, or parents abusing or even selling their children. But here is a tale of familial love proving that there is still light in this world with Hero Dog. 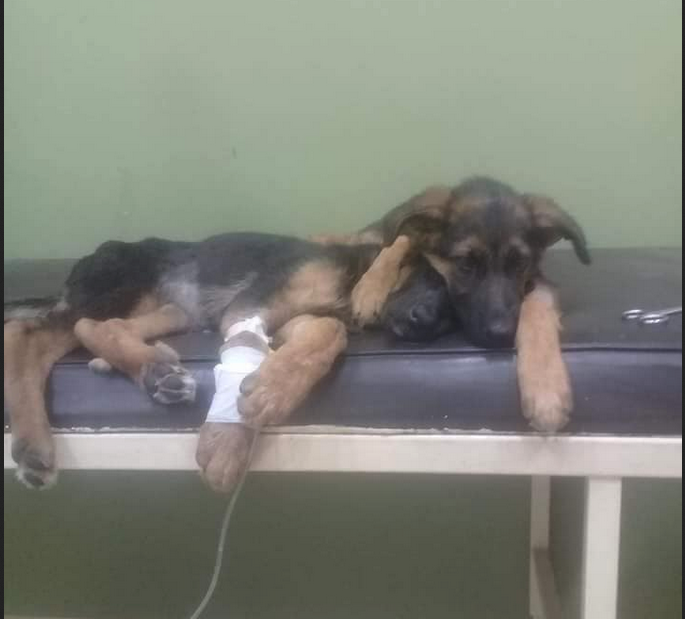 I work in an animal shelter where one morning we found a pregnant dog. The dog had looked as though she had been abandoned because she looked well cared. Within two days she had a litter of five puppies, and after they were ready to be separated from their mother, they were put up for adoption. As luck would have it, they were all adopted quite quickly. One man decided he would adopt two of them, so they had each other for company when he was out at work.

A few months later this man turned up to our clinic with the two puppies. They did not look good at all. The puppies had received most of their vaccinations, but the people that adopted them were supposed to give them the distemper shots. Apparently, he had forgotten to get the dogs’ their distemper injections, and they had developed the disease. Distemper is a horribly painful disease for dogs, and they don’t always survive. It is also highly infectious.

Both the puppies, Lilo the Hero Dog and Stitch, were kept in a separate room in the shelter where they could be continuously monitored. Both the puppies had a high fever and refused to eat anything, they kept throwing up everything they did eat. It was heart-breaking to see them like that, but through it, all, Lilo – the brother and Stitch, his sister kept close to each other as though comforting each other. The man that adopted them had not noticed their condition for too long, if he had brought them in sooner, their situation might not have been this serious.

For a whole week, the poor puppies were on an IV given antibiotics and saline water. Gradually Lilo the Hero Dog started to show signs of recovery, but Stitch continued to be sick. It was apparent to see that she was in a lot of pain. But through this, even as Lilo continued to improve, he never left Stitch’s side. It is usual for dogs, especially puppies, to start becoming lively and jumping around, but Lilo would just stick to Stitch. As he started getting better, he began licking Stitch and grooming her. He would snuggle up next to her as if to say, don’t worry, I’ve got you.

Perhaps it was all this love and encouragement from her brother that made Stitch start to improve too. As this happened, Lilo started to jump around and play, as though he had been waiting for Stitch to even be his puppy self. Both puppies made a full recovery and were adopted by another couple who cared for them better. They have their own social media profile, so we know what they are up to with each other.

Love like this is why philosophers thought the divine lived within us. Perhaps in our arrogance, we thought we were the only species on the planet capable of such compassion and love, yet animals are full of kindness to each other and even to us. This story gives me hope, it teaches me the meaning of love and loyalty.