Is it because dogs don’t say anything that we treat them however we feel like? Don’t worry, this story has a happy ending. But it’s a travesty that this story needs to exist in the first place to have a happy ending. Human negligence- plain and simple.

A 2 years old husky was left stranded on a balcony after the owners conveniently moved out. The husky was left with water or food for 2 weeks. The Parc Shores community in Atlanta had then called the emergency hotline when they came to realize that the owners weren’t coming back. According to Fox 5 Atlanta, it was a stroke of good luck that the puppy was saved, for temperatures had risen up to 100° F.

After the stranded husky was finally brought out, the Sheriff’s office brought out the official footage which showed the miserable condition of the husky. The neighbor who first called 911 said his mother couldn’t control her tears after they found the husky. 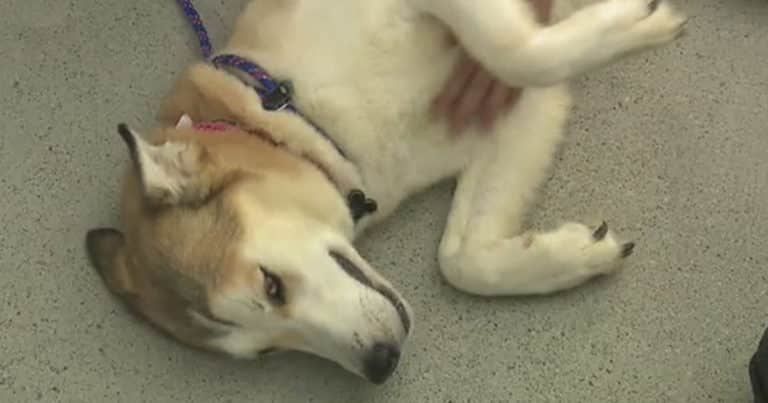 There was literally no moment that should’ve been spared in ordered to retrieve the dog. For, any onlooker could see the stranded husky scratching at the door, totally disoriented and weak. As the minute luck would have it, people finally responded.

The husky was taken to the Gwinett County Animal Shelter where they provided treatment. But this isn’t to hide the fact that such a travesty occurred which almost killed a living, breathing animal.

Alan Davis of the shelter has mentioned that while these issues aren’t that common, one ought to take care to not let this be a common occurrence. He further went on to add that if someone didn’t want to take care of the dog or had problems- they could easily communicate with the shelter. They would make sure no pup is left stranded.

In the meantime, the owners of the stranded husky have been identified as Daniel-Ugalde Andres and Nicol-Moreno Mariano. Warrants have been taken out in their names but they are yet to be found.

Authorities are of the opinion that it was malicious intent and not unintentional negligence that led to this. The owners quite deliberately wanted their husky to die.

Denise Dillon of Fox 5 was one of the firsts at the scene. She describes the stranded husky, after being provided with food and water- was quite happy.

Now, the owners have to pay.