We are used to seeing unusual bonding in animals but here is one mother-son duo with a difference. Brown mama cow had raised this dog all on her own when he was orphaned soon after birth. This gentle cow has nurtured the puppy as her own for two whole years. But their lives were about to go through a miserable period that would leave the inconsolable dog crying his heart out for his brown mama cow.

Read: Border Collie Gets A Shock When She Sees Herself On A TV Replay

They ate, slept, and lived together in the farmer’s barn. Rookie, the puppy, followed the brown cow all over the place, at times sleeping on mama’s back and hiding behind the protective walls of her strong legs whenever they felt threatened. They were an inseparable pair. But they were about to go through a rocky phase in their lives. 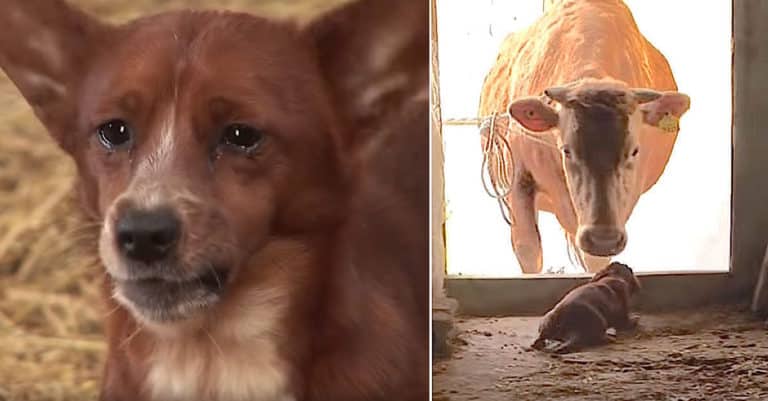 The farmer who owned mama cow had fallen on hard times. He had another cow and raising a second cow was proving a burden for him. He was forced to sell his brown cow to a nearby farmer. He felt sad but he needed the money a lot.

Rookie was naturally heartbroken when he could not see mama cow in the barn. The inconsolable dog howled all day and refused even to eat. He scampered across to the nearby farm in search of his mother when he heard her sad moos.

Read: Treats For A Dog: Researchers Find That Food Is The Most Effective Incentive For Dog Training

The farmer had to finally relent to the pleadings of the inconsolable dog and brown mama cow finally returned home. Well, this is as close to a happy ending we can expect in the real world. But the vet had a word of advice for the farmer. He advised him to allow Rookie to hang out with other dogs. But then that would never make up for the company of brown mama cow, would it?