Meet Mauka, a malnourished dog ‘pitbull’ that had to battle for years of her life. However, changed into a devoted friend after encountering love.

She is our spokes-dog for our fifth annual Shelter Bowl, which fund-raises to give sound suppers to protect pets over the United States. 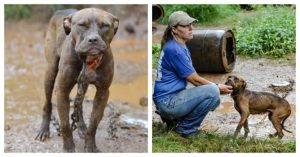 Rescuers from Cedartown Animal Rescue, Education, and Sterilization (CARES) helped spare 107 canines from an illegal dogfighting ring. The seriously malnourished dog was living outside on chains and had never known a delicate touch.

Be that as it may, when rescuers showed up a skinny pit bull comes over swaying her tail – this is the canine they named Mauka. She was shrouded in wounds from past battles and in urgent need of sustaining nourishment. 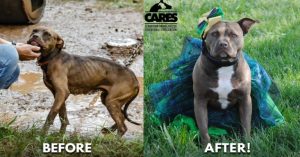 Mauka was taken in via CARES and encouraged nutritious nourishment as she encountered love just because. Not long after she showed up, she built up a high fever and started retching. She was carried to the vet and determined to have Babesia. It was treatable however the drugs were costly. The salvage said her life made a difference and continued with treatment.

Gradually, she began to put on weight and open up. Her character began to rise and after a year she at long last found a caring perpetually home. She presently lives with six different canines that she plays with and stays in bed with consistently. 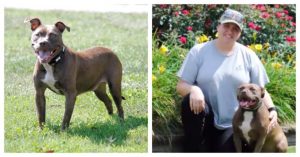 The shelter had the option to give all the fundamental veterinary consideration as a result of gifts from liberal individuals and from the cash they spared by accepting gave pet nourishment. Nourishment isn’t just imperative yet perhaps the biggest cost for a safe house. GreaterGood.org’s Rescue Bank helps fill the hole, guaranteeing that creatures hanging tight for their eternity homes, as Mauka, consistently have a full stomach.

That is the reason we made the Shelter Bowl and we need your assistance to meet our objective of $40,000 to nourish pets out of luck. As indicated by the National Retail Federation, football watchers will spend an expected $89 per individual on nourishment, drinks, and different things for this current Sunday’s major event. 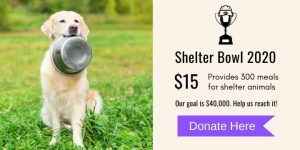 During the current year’s Shelter Bowl, that sum could convey 1,780 dinners to protect pets out of luck! Shockingly better? This year, every gift made between January 27th and February second will be coordinated by Purina®️, up to $40,000 esteem.

100% of your Gift That Gives More™ gift will go as a beneficent blessing to GreaterGood.org. GreaterGood stores pay the charge card exchange expense, so every penny of your gift goes to philanthropy. Mauka and a large number of other asylum pets thank you for giving and giving them solid nourishment.