This hero dog helps rescue koalas and he did a very great job! Meet Smudge, the canine hero who wore fireproof boots to help the animal’s life-saving efforts. Smudge helped firefighters rescuing animals from flames in the devastating Australian wildfires. 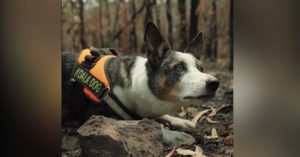 In some places, rescuers can just see koala survivors hanging on trees. However, the brush in this place is too thick to be seen by rescuers. Leigh said: “The trees can be really big, the canopy can be really dense and you just can’t see them by looking.” 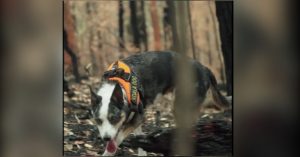 However, Smudge was hired to the team after volunteers discovered his strong ability to smell, in just five minutes, twice as much koala rescue as humans did in one hour. Working with Smudge has eased it for rescuers to save more koalas – in just a bit of the time. This amazing dog helps rescue koalas in a much shorter time than humans.

“They’re (detection dogs) incredibly useful out here,” said Leigh, who has a skilled team of human rescuers. “We’ve trialed a lot of different survey methods. The most effective by far is using the detection dogs.

Furthermore, Koalas’ faeces help rescuers know where they have to search. As trees with scat near their trucks have a bigger chance of including a burned, scared or starving koala hanging on the branches up there. Now Smudge runs ahead to search for koala faeces, then gets back to show rescuers what he found.

Leigh said: “The dog will help us find the scats. If we find fresh scat we can then start focusing on the canopy and doing an intense search and hopefully locate the koala.”

So, watch below how this good boy is doing his work!