A two-year-old Rottweiler going by the name Brutus was not well taken care of by his previous owners while still a puppy. He was always left outside in deplorable conditions for long periods causing him to develop frostbite on his four paws. In an attempt to alleviate his situation, the shrewd owners resorted to amputating the helpless Rottweiler’s paws leaving the ailing pup in a worse situation.

Currently, Brutus can walk again, thanks to the passionate and caring duo from Colorado. The two individuals, Laura Aquilina the new owner and Laura Ornelas, the renowned animal rescuer both from Loveland, initiated a fundraising campaign in a bid to change Brutus prevailing condition. 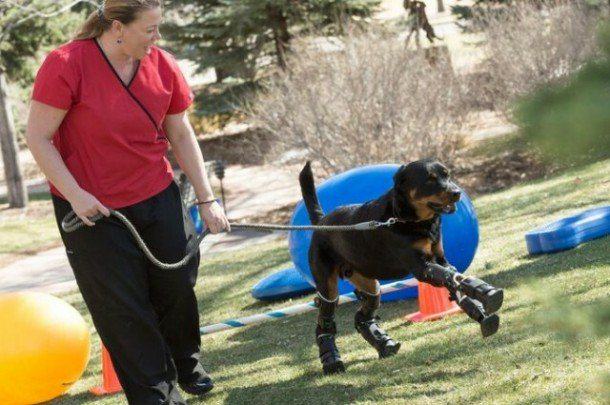 All that they needed was just $11, 900 to take the puppy for surgery but fortunately, their wish was granted and they managed to raise $ 12, 612 which was more than what they anticipated.

They took Brutus to an Orphopet in Denver, Colorado where the pup was provided with four brand new prosthetic paws. However, Brutus recovery took two months which was followed by six weeks of rehabilitation to recover fully. The limbs would enable Brutus to take longer walks and mingle with other dogs freely without any problem.

Even though Brutus story is a sad one, the good news is that he can walk again and do everything other normal dogs do. It is never usually that a quadruple amputee, especially a dog can walk again and lead a normal life after such an incident. But the modern technology has come in handy to save thousands of amputees by fitting them with prosthetic limbs that enable them to live normally, just like other animals.

For that reason and others, gone are the days when animals would suffer and eventually die painfully in the hands of careless owners. Without this kind of technology at hand, Brutus would not have been able to walk and play around with other dogs.

The Orthopets Company in Denver Colorado is committed to ensuring that amputated animals can walk again by making prosthetic limbs to take care of about 250 animals every year. In the case of Brutus, he was fitted with two rear prosthetic limbs in September 2014 and then followed by the front prosthetic paws almost two months later. Actually, this is a good ending for Brutus after his hope of walking and running just like any other dog was realized after acquiring artificial paws to replace the limbs damaged by the frostbite.