Most dogs play fetch with balls and sticks. But one Virginia dog found an orphaned bear cub and decided to bring him home.

The dog’s surprised owners called the Department of Game and Inland Fisheries, which rushed the orphaned cub to The Wildlife Center of Virginia for emergency care.

The center’s vet found the tiny cub mildly dehydrated but otherwise bright, alert, and chatty. All good signs considering the baby’s scary ordeal. Then rescuers nestled the cub inside an incubator to keep warm and nursed him back to health with regular bottle feedings. 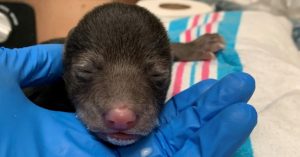 As fate would have it, the wildlife rescue was already caring for a second orphaned bear cub. This little girl had been rescued from a woodpile by power line workers, who’d discovered the tiny bear by herself and nearly frozen to death.

Although smaller than the cubs that usually pass through this facility, both of the orphans were about the same size (540 and 566 grams, respectively).

Rescuers placed them in the same incubator so they could cuddle, comfort, and keep each other warm. 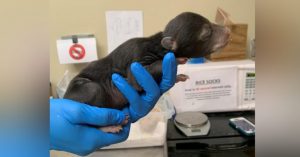 While the orphaned cubs collected their strength, rescuers went looking for mama bears. They might be willing to welcome the rescued cubs into her den. Being slightly larger, the little girl cub went first.

The first fostering attempt was a success! “The sow held tight in her den and immediately scooped this little cub in when I placed her near the den entrance.”. Rescuers reported. “The cubs in this den (we think there are two) are probably about two- to three-weeks-old. This is a large sow (225+ lbs) so she should be able to take care of them all! I rechecked her [Monday] evening approximately 4.5 hours post-foster and they are all tucked in the den quiet as can be perfect scenario!” 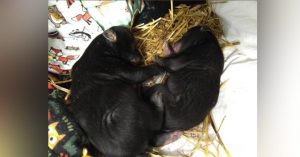 A couple of days later, DGIF biologists placed the boy cub with a different black bear family. “[A]ll went well with today’s foster!” rescuers reported on their website. “The biologists darted and sedated this particular sow. So, they could replace her radio collar and also place Black Bear cub #20-0084 with her. The biologist reported that the sow had three biological cubs … and now, one extra!” 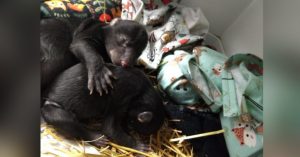 We’re so grateful that rescuers (including the dog) took such good care of these orphaned bear cubs! Keep an eye on the Wildlife Center of Virginia’s website and Instagram for updates on how these little rescues are doing with their new foster families!