A devoted dog used every bit of his fading strength to awaken his owner and passed away after he had met him. The poisoned puppy was targeted by dog lifters. The dog repeatedly banged the door where he knew the owner slept even as he realized that he was dying.

Liu Zhiqiang, the dog’s owner said the puppy, only six months old was foaming at the mouth. The poisoned puppy died before Mr. Liu could return with the medicines.

READ: Family Build A Puppy Bucket List When They Realized That Their German Shepherd Didn’t Have Long To Live

The devastated 28-year-old owner posted that the dying dog was desperate to meet him before his death. The post went viral on Douyin, the video-sharing site in China.

The poisoned puppy died only after it managed to alert the owner. Mr. Liu is from Hengyang, a city in the Henan Province of Central China. Mr. Liu had bought the Castro Laboreiro to protect his fish pond. He had named the dog ‘Huzi.’ 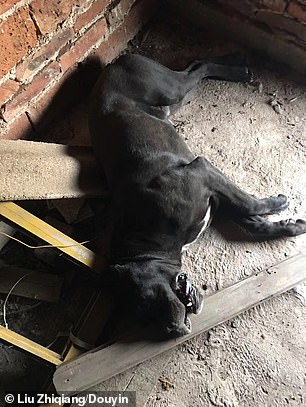 Huzi consumed the poison that the thieves left around the fishing pond. Mr.Liu heard his dog at around 8 a.m. as he lay sleeping. He had ignored Huzi at first because he thought that it was too early to let in the dog.

Huzi then ran on to the 2nd floor and began barking. Mr.Liu went up to the second floor to check and found Huzi foaming at the mouth and twitching. Realizing what had happened he hurried out to get medicines for the poisoned dog. His grandmother gave him the heartbreaking news as he returned with the medicines.

Read: A Violent Neighbor Hopped Over The Garden Fence To Beat Their Dog Blind

The devastated owner said that Huzi had always been happy and cheerful and been in the best of health. He loved Mr. Liu and they shared a close friendship. They had been together right after Huzi’s birth.

It had been a terrible and sad day for him, the owner posted last Thursday on Douyin. It was particularly heartbreaking to see the poisoned puppy die in such pain. An estimated 10 million dogs are butchered in China for meat every year. Many pets are stolen from their owners. At times dog thieves use darts and return later to pick up the poisoned dogs. Lack of stringent laws makes their task easier.

We hope such animal abuse comes to an end soon.