There’s not a lot of difference between looking after a baby and looking after a puppy except that pups grow into adulthood much faster. Any good pet owner will care for their fur babies just as much as they’d care for their own family and love them all the same way. Just like babies, puppies need to be potty-trained and taught how to behave in different situations. They depend completely on their humans for love and support and trust them almost blindly.

While abuse in any form is evil, there is something even more disturbing when it is being done to a helpless being that trusts the person completely. A puppy being horrifically abused is extremely shocking because this is a baby who trusts the adults around them completely. It would take a person with a very cold heart to even think of something like that. 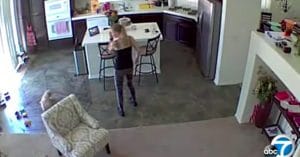 Amanda and Bryce Horton, a couple living in Victorville, California, are the proud parents of a labradoodle called Lucy. At ten weeks old, she is an adorable ball of fluff and she is well-loved by her family. Recently when they had to go out leaving Lucy at home, they called a sitter who they had earlier hired through a site called Rover. They had used her services a few times before for their pup and no issues had cropped up so far. 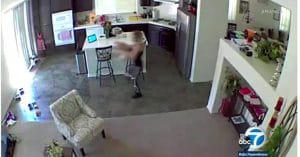 Leaving Lucy in her care, Amanda and Bryce didn’t feel like anything was amiss when they left their home. Luckily, they had installed motion sensor security cameras in all the rooms for safety and this was what alerted them that something wrong was happening. The cameras were connected to their phones and when they opened the alert from the camera, they saw something devastating.

Their puppy was being horrifically abused by the woman who had looked after her a number of times. They saw the sitter pick up Lucy and slam her hard on the floor. Through the camera, Bryce immediately yelled at her to stop it, get her stuff, and just leave. She quickly gathered up her things and left and her only excuse was that she had been frustrated. 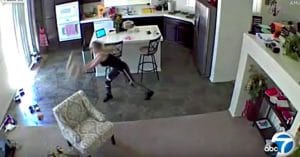 Fortunately, they were able to rush Lucy to the vet and it was found that she had sustained no injuries. Their doctor even commented that their pup must have bones made of rubber because she had been slammed quite hard into the far. Despite the puppy being horrifically abused, she is well on her way to recovery and will go back to her playful self in no time at all.

In the meantime, the San Bernardino County Animal Control is investigating the matter to see if criminal charges can be brought against the sitter. Rover has also removed her profile from their page and has blocked her from ever creating a profile again. They have even made an offer to the Hortons to compensate them for any expenses incurred at the vet.

The Hortons themselves were heartbroken because they’d only hired the sitter to ensure that their fur baby wouldn’t be left alone for more than a short time. The footage of the puppy being horrifically abused left a mark. All pet owners should take a leaf out of their book and ensure that the people they trust the care of their pets to can be monitored so that they can be prevented from doing things like this.