He was the epitome of neglect and cruelty when he was left at an Animal Control in South Carolina this week. This puppy, barely 6 months old, moved even the rescuers to tears when they first laid eyes on him. The Great Dane was abused and then dumped by the owner at the animal rescue. He should be having the time of his life, not waiting to be put down. 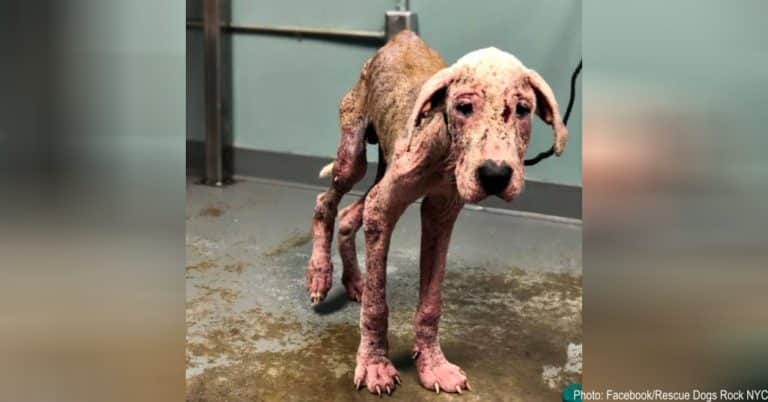 The innocent pup was dumped at Animal Control in the city of Greenville, South Carolina. He had to be rescued by the end of the day, 5 pm to be precise, or put down owing to his horrific condition. The rescue team ensured that it didn’t happen.

The team from Rescue Dogs NYC immediately shifted the Great Dane to an emergency room vet. The Great Dane was abused horribly and was a ghost of the magnificent breed, weighing barely 23 pounds, a living example of brutality and neglect. His hollow eyes pleaded to be saved. 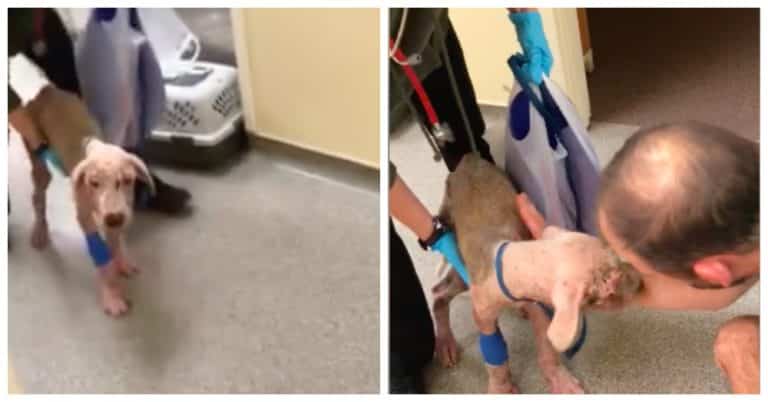 The 6-month-old pup was first taken to the emergency vet. His chances of making it were slim as his skin was peeling and inflamed with infection. He was running a temperature. They were yet to determine whether septicemia had set in. 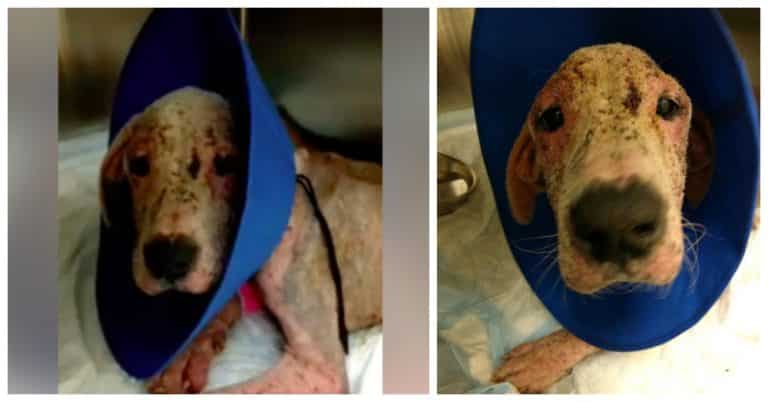 The pup was hanging on, but barely. But there was hope for the gallant puppy. Surrounded by love and care he hoped to recover. He was relieved among people he can trust though he every reason not to. The rescuers didn’t expect him to make it even through the night, given the extent to which the Great Dane was abused. But the fighter survived. They have named him Gallant.

The ER vet kept him under constant monitoring and he was given IV fluids, antibiotics, and medicines. He has stabilized a bit and has been transferred to the care of a regular vet. It is an arduous road ahead. Hope he recovers soon.

This is what CRUELY ABUSE & NEGLECT look like! Puppy Gallant is 6 mos old & fighting for his precious life tonight in a SC emergency vet. He may not make it thru the night. He’s emaciated with bloody raw enflamed skin. He’s got a fever yet he’s shivering. We hope he is not septic! 🤬🤬🤬🤬🤬 any yes he wags his tail though he has NO reason to trust humans! SickeningPlease stand with us to save him! He deserves to live! 😡😥💔🙏www.paypal.me/rescuedogsrocknyc to donate & help!

The brute who dumped him at the animal control won’t face charges just because they gave up the pup. While the Great Dane was abused and neglected in the most horrific way possible, his tormentor will go unpunished because he surrendered the dog to Animal Control. But we are glad that the puppy was saved.

You can follow his progress on Rescue Dogs NYC. 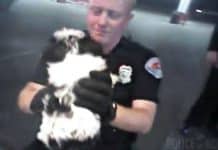