Street life is so hard. It leaves both animals and humans so hungry, cold and not sure where they can get their next meal.

Sub way sally is a stray dog luckily discovered the friendly employees at Subway sandwich shop. It would have been better having a family and regular meals for sure, but at least she found who can save her from being always hungry searching from scraps. 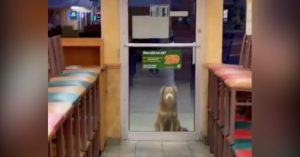 Now, this smart pup goes to Subway for dinner everyday. She stands there outside the glass patiently waiting to be noticed. Workers posted a video on TikTok that went viral instantly, they wrote: “We always feed her.”

Subway employees named the dog ‘Subway Sally’. The gentle stray dog that has been there for dinner for the past year. Definitely, as if you’ve seen the plate full of mixed foods they offer to her, is what makes her come on a daily basis!

One envious user complained after watching Sally scarf down turkey and bacon once said: “Y’all give the dog more meat than us paying customers,” (These generous workers take care to skip the bread, sauce, and everything else that may destroy a dog’s digestive system.)

Subway Sally doesn’t have an official family or home, but she already found many people who love her on Twitter! “Someone adopt her I wanna cry,” one Twitter user commented. “Not to be dramatic but I would die for Subway Sally,” a second user insisted. “Someone adopt her please,” a third person agreed.

It doesn’t seem like any of the employees will be in trouble for that. The sandwich chain wrote in response to the steady outpouring of doggie love on Twitter: “Subway Sally just made all of our dreams come true.”

We are very happy that these workers take care of Sally. We hope she can find a home soon also.

Dog Throws A Sassy Tantrum Since Mom Refused To Let Him Sit In Her...

Dogs Abdo - October 23, 2021 0
Southern Indiana Animal Rescue rescued a Dachshund mix called Napoleon, who was in a very bad condition! The dog does not stop from being...