Not all heroes wear capes. These two women saw a dog was dragged alongside a scooter by an unmerciful man in Vietnam, and instantly interfered to save the pup’s life. They recorded the horrible incident before they stopped the man and asked him to release the dog immediately. 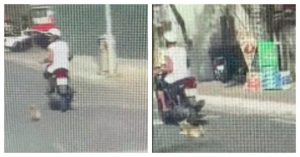 In the video the women recorded, the dog was running to keep up with the scooter but when the man increased his speed the dog was dragged behind him. The man tied a rope around the dog’s neck that the cruel man was holding with his hand. The dog was being dragged on the hard asphalt.

However, a man helped the women to save the dog. They all together managed to stop this heartless man. There was blood on the ground where he was dragging. The poor pup’s paws and stomach were injured. You can imagine how painful it was for him. Also, this monster argued with the women, as he refused to let the scared dog go. 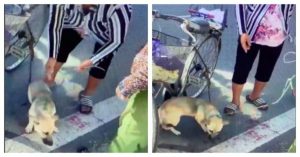 Fight Dog Meat, an animal welfare group that helps rescue and re-home dogs and cats from the meat trade, posted the video and said, “The motorbike man was furious and threatened them, but they held firm and protected the injured dog. The motorbike man tried to pretend he didn’t know, etc. The ladies didn’t believe a word he said.”

Finally, the man surrendered and went on his scooter away. The women took the suffering injured dog to the local vet for medical treatment. 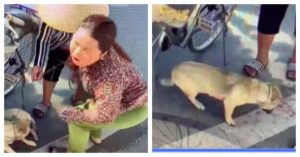 The rescuers were thinking that this dog most probably was going to be used for food. However, these two women came at the right time to rescue his life.

Unfortunately, almost 5M dogs are used every year for food in Vietnam. Many of the dogs savagely massacred are stolen pets and the rest are stray dogs. The dogs and cats suffer strong pain before they are killed and eaten.