As Darrell Perkins was getting ready to head to work on a Thursday morning, he heard what sounded like an animal in pain. The howls were coming from the riverbank near his home. Out of curiosity, he decided to walk towards the noise to investigate it. It soon became clear that the noise was a dog’s howl. He then remembered that his sister’s 12-year old Golden Retriever, Ginger, had gone missing from her home five days ago. While they had all assumed the worst, could it really be their missing senior dog?

Well I certainly have had an eventful day what had happened is that my sister and brother-in-law's little dog from next door has been missing since Friday and we just knew she was dead somewhere but this morning I was getting in my van to go to work and I hear a lot of howling it sounded like it was coming from the other side of the river but by knowing that Ginger was missing I thought I would investigate as I walked the River Bank I found Ginger stuck in the mud and in Creek Water next to the river she she had been there since Friday I'm thankful that the river hadn't raised a couple feet or she would have drowned I didn't know what to do so I called my neighbor Mitchell McCoy and I called Johnny Rickman the dog warden for Lawrence County he came right away. I could not have rescued the dog by myself the hill was too Steep and muddy and right against the river so with their help we got Ginger safely to the top and she is now at Tri-County Animal Clinic thank you Johnny and Mitchell for the rescue…..the video is of Johney bringing Genger up

Perkins found Ginger a little way down next to the river, feet stuck in the mud and her face gently resting on the riverbank while she howled in pain. The bank’s steep and slushy slope was impossible to conquer alone, so Perkins immediately called his neighbor, his sister, Brenda Osborne, and the warden of Lawrence County Animal Control, John Rickman.

Read: Dog Gets Stuck In Tar And Courageously Calls For Help 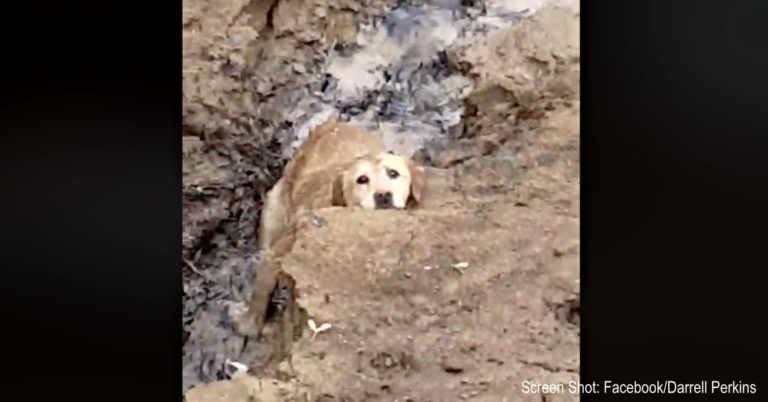 Rickman put on some safety equipment and a harness, and slowly walked down the bank. Ginger looked up at the small crowd that had gathered, including her owner, with her big black eyes begging to be helped. When Rickman reached the missing senior dog, he picked her up and attempted to climb back up. It became clear to him that she had injured her leg. That was part of the reason why she couldn’t get out of the situation she had been in for five long days!

The sweet-tempered senior dog didn’t resist, just patiently sat in his arms. The climb was precarious, with parts of the riverbank breaking off and falling into the river, and the slick mud making it impossible to get a grip. But Rickman’s courageous efforts were all recorded by Perkins, who later put up the video on Facebook. 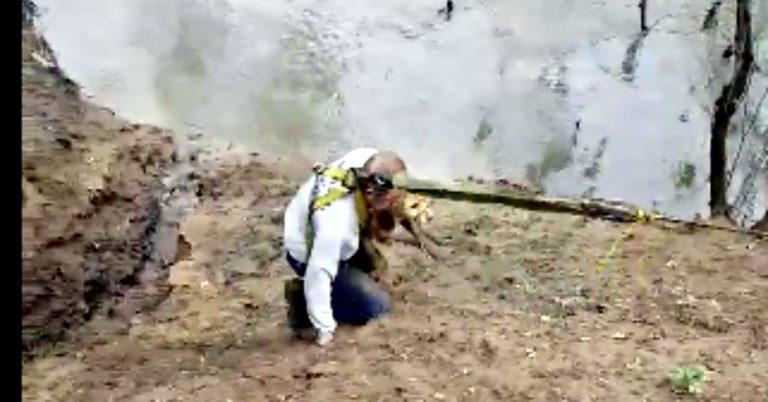 Ginger was rushed to the Tri-County Animal Clinic, where they identified her leg injury. Five days out in the wild had also made her weak. The missing senior dog had been stuck right next to the river, but the low levels of water were a blessing. If they had risen in the time it took for her rescuers to find her, she could have drowned. Luckily, all this missing senior dog wanted was some TLC. She slowly recuperated until she was back on her feet and home again.